END_OF_DOCUMENT_TOKEN_TO_BE_REPLACED

MESOPOTAMIA NEWS DEBATE: Hezbollah Has Prepared for This Moment for Decades

“What is just retribution?” So asked Hezbollah leader Hassan Nasrallah in a speech on January 5, two days after the United States killed Iranian Quds Force commander Qasem Soleimani and Iraqi Popular Mobilization Forces (PMF) commander Abu Mahdi al-Muhandis in a drone strike in Baghdad. With no American official “on par with Soleimani or Muhandis,” in Nasrallah’s estimation, the answer was to retaliate against “the American military presence in our region.” American civilians shouldn’t be harmed, he said, but “the U.S. bases, the U.S. warships, every American soldier and officer” in the Middle East would all be fair game.

Hezbollah is unlikely to pick a fight with the United States by itself. The group has its own tensions with Israel to worry about, and huge domestic protests jeopardize its political grip on Lebanon. It also suffered heavy losses in Syria, where it fought hand-in-glove with Iran to prop up President Bashar al-Assad. But not wanting a war isn’t the same as being unwilling to fight one. Hezbollah has been preparing for this day for decades, building up military, terrorist, and cyber capabilities in Lebanon, the Middle East, and around the world in order to strike back at the United States and anyone else who might join a war against Iran and its allies. Now, because of its ideological commitment to and military interdependence with Iran, the group may have no choice but to enter a conflict with the United States.

Last week’s Iranian missile attack on two Iraqi bases that host U.S. forces was Tehran’s initial, symbolic, and overt response to Soleimani’s death. The full response will unfold in the coming months and years—and will likely feature Hezbollah in a starring role. Playing to its strengths and avoiding a direct conventional confrontation with the United States, the Quds Force and its Hezbollah partner may attempt to orchestrate a regional campaign of asymmetric attacks across the Middle East and possibly outside of it.

MESOPOTAMIA NEWS FOCUS : The Impact of the Fall of the Syrian Pound: Interview

The Syrian pound continues to depreciate sharply in value, with one U.S. dollar now being equivalent to more than 1100 Syrian pounds by many exchange rates. This depreciation has had a sharp impact on people’s livelihood inside Syria and more people are beginning to speak up. The Syrian state media agency SANA even provided coverage of a recent peaceful demonstration in the southern province of Suwayda’ protesting against the high cost of living.

To get some local perspective on the problem of the depreciation of the Syrian pound and its impacts on the Syrian people, I conducted an interview with Abu Hadi, a resident of the Damascus area. This interview was conducted on 15 January 2020. It is slightly edited and condensed for clarity. Any parenthetical insertions in square brackets are my own.

END_OF_DOCUMENT_TOKEN_TO_BE_REPLACED

17 Jan 2020 – The filling of the controversial Ilisu Dam continues despite the ongoing strong critic and protests by the affected communities along the Tigris River and civil society organizations from all over Turkey. Almost two weeks ago the raising dam reservoir has reached the 12,000 years old town Hasankeyf which is one of the most magnificent cultural and natural heritage sites at our planet. The planned “apocalypse” by the Turkish government is becoming slowly reality!

Situation in Hasankeyf
Caught unprepared and uninformed, the residents of the mainly Kurdish populated Tigris Valley are unjustly made to emigrate from their homeland. Many people, especially in the province of Siirt, had to evacuate their villages without taking some of their belongings because the water was rising quickly.

What has been criticized by us and other in the last two decades is happening step by step and displaced people are confronted with poverishment in the new target settlements. While it is planned to flood 85 villages completely and 124 villages partially, the State Water Management (DSİ) has built only four new settlements, which forces tens of thousands of people to emigrate to Siirt, Batman, Diyarbakır and other big cities with meagre compensation rates. Among them are over ten thousand landless people who have not received any compensation at all. These people are supported by neither the DSİ, nor the trustee-appointed municipalities.

Having approached the district center of Hasankeyf in late December, the water level of the Ilisu Dam has been rising since July. Up to date around 35 villages have been already flooded in the last months.

While hundreds of families have been evacuated from Hasankeyf to New Hasankeyf – the resettlement site 2 km in the north – one by one since August 2019, in the last 2 months 40 families still lived in Old Hasankeyf as they have become homeless and do not know where they will bring their animals. They had access to only one tea house and a grocery store. Given water only for one hour a day, the families staying in Hasankeyf are now facing enforced displacement. Their number is now decreasing with the entering into the city.

When the historical bazaar was demolished with construction equipments in November, Hasankeyf received another blow. With the demolition of the bazaar, structures going back 2 thousand years were uncovered. The ‘rescue excavation’ undertaken by the Ministry of Culture for these structures sparked criticisms.

Construction equipments keep damaging historical fabric in other sites and the 80 meters high barrier set up around Hasankeyf Castle and constituting a crime in terms of landscape keeps on rising.

The people who have moved to New Hasankeyf are not content with their situation. As tourists come neither to old nor to new Hasankeyf, thousands of people have significant less income and are faced with the risk of becoming unemployed. In addition to financial difficulties, another important problem in New Hasankeyf is that the water coming from the tap is undrinkable. That is why daily many people transport drinkable water from Hasankeyf to New Hasankeyf. While the people of Hasankeyf used to live in and with water, they now have difficulties in access potable water. If people are not provided with job opportunities and if the problem of drinking water persists, people will have likely to emigrate from New Hasankeyf as well. If this happens, the vast majority of New Hasankey’s population will not consist of local people. The people of Hasankeyf are now against the Ilısu Project more than ever before.

We can stop it despite everything

The directly affected people from Hasankeyf and the 199 villages raise their critic more than ever against the Ilisu Project as they experience the expected disastrous social, cultural and ecological impacts. Almost the whole society in the affected provinces in the Tigris basin consider this project of destruction, eploitation and domination as a big loss and oppression.

We can stop the apocalypse that has unfolded in the Tigris Valley despite all the destruction that has been brought about. We are not tired of repeating that it is never too late for Hasankeyf and the Tigris River. No matter at what point we abandon the Ilısu Project, it will be to the benefit of us and next generations!

In 2019 in Turkey, groups more diverse than ever before stood up against Ilısu project and indicated that Hasankeyf had to be saved. This reaction should be prompted again by every person and organization and the government should be requested to stop filling the Ilısu Dam. It is urgent, we have no time to lose!

IT IS NOT TOO LATE FOR HASANKEYF AND THE TIGRIS RIVER!

Remarks:
1) This is a link showing the first days of the reaching dam reservoir in Hasankeyf: https://www.youtube.com/watch?v=QXAjqW-M7s4&feature=youtu.be
2) At the website you can find more pictures which you can use by citing the Hasankeyf Coordination or the Initiative to Keep Hasankeyf Alive.
2) You can find this statement at the website of the Initiative to Keep Hasankeyf Alive: http://www.hasankeyfgirisimi.net/?p=1426

17.01.2020
Hasankeyf Coordination (Initiative to Keep Hasankeyf is part of it)

Latest photos for #ISIS Mufti. He was the strongest supporter of demolishing Mosul heritage. He used to give the Friday Sermon in my neighborhood. He cheered up in the very Friday after the blowing of Prophet Jonah Mosque in the early days of their invasion.
Social media https://t.co/VWOCR4nmJE pic.twitter.com/zGYoVSuAaF

He is considered a major capture. Shifa Al-Nima (شفاء النعمة) ordered the destruction of Nebi Yunus in Mosul.

END_OF_DOCUMENT_TOKEN_TO_BE_REPLACED

Hosting event marking 75th anniversary of Auschwitz liberation, Israel’s Holocaust remembrance authority is now facilitating the Kremlin campaign to blame Poland for the outbreak of WWII – and to whitewash Stalin’s handshake with Hitler

For months now, Putin has been waging a blatantly anti-Polish campaign, claiming, in part, that Poland played a part in the outbreak of World War II and that it collaborated with Nazi GermanyReuters

At the end of this month, days apart, two international ceremonies will be held to commemorate the 75th anniversary of Auschwitz’s liberation from the Nazis: the first at Yad Vashem in Jerusalem and the second at the site of the concentration camp itself in Poland. World leaders, prominent Jewish figures and Holocaust survivors have been invited to both.

Holding more than one ceremony dedicated to a major anniversary is not that unusual, but there is more than that going on here. Behind the desire to honor the memory of the victims lie other, less honorable interests. Internal Jewish community politics, diplomatic skirmishes, historical disputes and games of power and ego have all come to be involved in the event at Yad Vashem in particular – a commemoration of atrocity that could be assumed to be untainted by extraneous considerations.

END_OF_DOCUMENT_TOKEN_TO_BE_REPLACED

Turkey advances plans for its “settlements” in Syria, only in Tel Abyad area as a way to push demographic change, not in Jarabulus

Turkey announces it will build ‘settlements’ in occupied Syria

Turkey wants to settle mostly Arab Syrian refugees in Kurdish areas of Syria, rather than in areas around Jarabulus which Turkey also occupied. 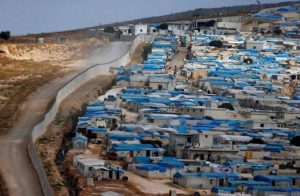