MESOPOTAMIA NEWS Intel: How many US troops do 2020 Democrats want to keep in the Middle East?

Democratic presidential hopefuls started Tuesday’s debate by slamming President Donald Trump’s Iran policy and articulating their own vision for the future US force posture in the Middle East.

Former Vice President Joe Biden vowed to “leave troops in the Middle East in terms of patrolling the Gulf,” characterizing the roughly 40,000 US troops currently stationed in the Arab Gulf states as “a small number of troops.” He also called it “a mistake to pull out the small number of troops that are there now to deal with [the Islamic State],” vowing to leave US special forces in place to deal with the terrorist group. 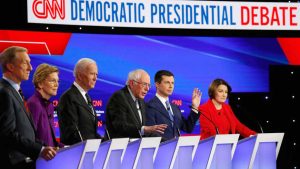 END_OF_DOCUMENT_TOKEN_TO_BE_REPLACED

Opinion : HOW TO BE JEWISH ? – Fascism Just Isn’t Fun Enough for Israelis

There’s no problem for Israel to be Jewish and democratic simultaneously, so long as the two terms remain empty of content

Jewish and democratic – that’s ostensibly the source of the problem, of the paradox. You can’t be both a cat and a dog. But the current era, which is a time of miracles and wonders, is raising the possibility that you can be both, that there’s no real contradiction there. To continue to insist that these are two different, conflicting things that don’t go together – a Jewish state and a democratic state – is simply not to go with the flow. Everyone who does do that, however, knows that in the sort of Zen Buddhist void in which Israel is floating, no hard and fast meaning is actually attributed to the terms themselves. All is diffuse, amorphous, inchoate – it’s all fun. People who go with the flow know that this dilemma is a thing of the past and that now the State of Israel and its citizens have no problem being democratic and Jewish in the same breath, or being anything else that they may want to be, for that matter. Each of these terms has undergone a dazzling process of flexibility, while becoming empty of content. No contradiction is conceivable between nothing and zilch.

END_OF_DOCUMENT_TOKEN_TO_BE_REPLACED

Some of Syria’s leading figures met in secret this week in Berlin to overcome the sectarian divides that are tearing their country apart. This is shadow diplomacy, away from the glare of publicity and political pressures, to find a path to peace. Sunni tribal chiefs, some of whom have their own militias, sat opposite Alawite dignitaries with close links to the Assad regime.

A Kurdish Yazidi leader was next to a former Syrian ambassador to the UK. A couple of dozen key figures from Syria’s most important families, clans and communities gathered around the table, including Christians, Kurds, Druze, Sunnis and Alawites.

END_OF_DOCUMENT_TOKEN_TO_BE_REPLACED On January 8, 2020, operatives of the Headquarters for the Liberation of Al-Sham mounted a local attack and took control of four villages about 20 km northeast of Maarat Nu’man. In response, Syrian army forces fired artillery and Russian and Syrian fighter jets carried out a series of airstrikes. On January 12, 2020, a ceasefire agreed upon between Russia and Turkey entered into effect. At that time, the Russian and Syrian airstrikes stopped. However, the following day (January 13, 2020), the Headquarters for the Liberation of Al-Sham continued its military activities against Syrian targets (artillery, antitank and sniper fire). In the ITIC’s assessment, it is highly doubtful whether the ceasefire will survive because both the Syrian army and the Headquarters for the Liberation of Al-Sham, the two main sides fighting on the ground, have no real interest to maintain it. Ceasefire agreement between Russia and Turkey in the Idlib region

On January 12, 2020, a ceasefire entered into effect in the Idlib region. The ceasefire was agreed upon in the meeting that took place on January 8, 2020, between the Russian and Turkish presidents (Anadolu News Agency; Sputnik News, January 12, 2020). As in previous agreements, it is doubtful whether the current ceasefire agreement, in which Turkey has the greatest interest, will be maintained for a long time. The Headquarters for the Liberation of Al-Sham (the dominant rebel organization) is not party to the agreement and it is highly doubtful whether it has any interest in a ceasefire in view of the achievements of the Syrian forces (which have reduced the area controlled by the rebel organizations). In the ITIC’s assessment, the Syrian army strives to complete the removal of the rebel organizations from the Idlib region, so it also does not have any real interest in maintaining the ceasefire. Thermal sniper shooting company of the Headquarters for the Liberation of Al-Sham shooting at “Iranian occupation militias” (i.e., militias handled by Iran). The shooting took place west of Aleppo, while militiamen were trying to evacuate the bodies of their operatives (Ibaa, January 13, 2020) The Syrian army calls on residents of the Idlib region to evacuate the area controlled by the rebels (Edlib Media Center, January 12, 2020)

The Syrian representative at the Moscow summit: Syria is determined to liberate the entire Idlib region ISIS continued its activity in Iraq at low intensity. This was probably due to incidents related to the killing of Qods Force Commander Qassem Soleimani and the stormy weather. The following are highlights of ISIS’s activity in the various Iraqi provinces this week (according to ISIS’s claims of responsibility). Counterterrorist activities by the Iraqi security forces and the Popular Mobilization

The Popular Mobilization: The extensive security activity against ISIS will continue

On January 13, 2020, commanders of the Popular Mobilization (the umbrella framework of Shiite militias) held a meeting at the headquarters of the deputy commander of the Popular Mobilization (i.e., Abu Mahdi al-Muhandis, who was killed along with Qassem Soleimani). At the meeting, they examined the security and military priorities of the Popular Mobilization forces. At the meeting, it was decided that the extensive security activity would continue and that “quality” operations would be carried out against ISIS operatives. It was also decided to continue to fortify the defense positions and to defend the borders against infiltration [by ISIS operatives] (al-hashed.net, January 13, 2020). Thursday, 16 January, 2020 – 12:45  ASHARQ AL AWSAT  – The US has welcomed diplomatic efforts to end violence in Libya, wrote the press officer at the US State Department Spokesman’s Office in a letter to Asharq Al-Awsat.

Aaron Testa said Washington supports Libyans’ demand to build a secure future without any foreign intervention. He pointed out that the US administration “positively appreciates the Libyan leaders who understand the need for a ceasefire, followed by a political process suggested by Libyan parties and not imposed from abroad.”

Testa stressed the need to withdraw all foreign forces that have fueled the conflict in the country, urging all Libyan parties to seize this opportunity to address the political, economic and security issues that divide them.He affirmed his country’s support for Libya’s sovereignty and territorial integrity.

The officer also called on countries that claim to support stability in Libya to withdraw their forces immediately, including Russian mercenaries and the Syrian fighters they support and whose intervention has greatly deteriorated the humanitarian situation there.

END_OF_DOCUMENT_TOKEN_TO_BE_REPLACED

The death of Iranian Quds Force Gen. Qassem Soleimani placed the entire Middle East, if not the world, on edge. Iran’s recently growing stronghold only demonstrates that it is time for the United States to support an option that will counter Iranian power and chaos: an independent Kurdistan. In the past, the U.S. relied on its allies to help balance power in the Middle East. Israel remains a strong American ally but needs our help to deter Iran’s blatant power grabs. Previously, Iraq, Syria, and Lebanon acted as buffers between Iran and Israel. But Iran has actively sought control in each of these three countries in order to create a land bridge between itself and Israel. Today, Iran controls Lebanon’s Hezbollah and props up Syria’s brutal dictator, Bashar Assad, using him as a puppet.

Despite America’s history and presence in Iraq, Iran’s influence there, too, is undeniable. Iran was behind the recent attack on the U.S. Embassy in Baghdad. Iran orchestrated the Iraqi parliament’s vote to expel U.S. troops. And Iran is responsible for the attacks on American service members in Iraq at the al Asad air base and in Erbil, the capital of the semi-autonomous Kurdistan Region in Iraq.

END_OF_DOCUMENT_TOKEN_TO_BE_REPLACED

Donald Trump & the Lubavticher Rebbe are running for Knesset?

Few ‘Anglo candidates’ are in realistic slots to make it into the 23rd Knesset.

By GIL HOFFMAN   JANUARY 16, 2020 15:01 – JERUSALEM POST – US President Donald Trump is busy with his own re-election campaign in America, but a political party in Israel submitted his name as a Knesset candidate in the March 2 election.

The Red and White Party, headed by businessman and activist Ami Feinstein, placed Trump eighth on his list of candidates and the late Lubavitcher rebbe, Menachem Mendel Schneerson, ninth on the list. Feinstein submitted the list on Wednesday to the head of the Central Elections Committee, Supreme Court Judge Neil Hendel.