MESOPOTAMIA NEWS: QUOTATION OF THE DAY !

END_OF_DOCUMENT_TOKEN_TO_BE_REPLACED

The Future of Northeastern Syria: In Conversation with SDF (PKK/PYD)Commander-in-Chief Mazloum Abdi

With the latest unexpected escalation between Iran and the United States in Iraq, the ongoing challenges of Syria have, for the moment, become a less-discussed point of regional tension. However, for the Syrian Democratic Forces (SDF), which precariously continues to control an autonomous region of Northeastern Syria, the last few months have tested the organization’s hold over the region.

END_OF_DOCUMENT_TOKEN_TO_BE_REPLACED

9 Jan 2020 – Wafaa Dallal 10 Std. ·
The U.S. Army is transferring tons of gold from Daesh-held areas in Syria to the U.S., multiple reports said.
According to a source who spoke to Kurdish Bas News Agency, the U.S. forces transferred about 50 tons of gold from areas seized from Daesh terrorists in eastern Syria’s Deir el-Zour region and gave a portion of the remaining gold to the PKK’s Syrian offshoot People’s Protection Units (YPG).
More via www.mesop.de

Over 20 shepherds have been killed in a massacre in the Maadan area of eastern Syria.Syrian activists have reported that 21 shepherds were killed in a massacre on Sunday in the Maadan area which is located between Raqqa and Deir al-Zour in eastern Syria. The massacre took place two days after the killing of Iranian commander Qasem Soleimani in a US airstrike near Baghdad Airport in Iraq.
The area where the massacre happened is under Syrian regime control. Syrian Facebook pages and news websites blamed Iranian militias, who have a significant presence in the regime-held areas of eastern Syria, for the massacre.

END_OF_DOCUMENT_TOKEN_TO_BE_REPLACED

Hospitals and Schools Are Being Bombed in Syria. /  A U.N. Inquiry Is Limited.

We Took a Deeper Look.

The bombs smashed into a child care center, a refugee camp and a school. They destroyed makeshift clinics and hospitals, disabling essential services for tens of thousands of people.

Over the past year, attacks on buildings in northwestern Syria, which are supposed to be off limits during wartime under international law, grew so frequent that the head of the United Nations launched an inquiry to document the violations.

END_OF_DOCUMENT_TOKEN_TO_BE_REPLACED

​​​​​​​Riyad Darar denied what the media reported on the participation of SDC in the upcoming Constitutional Committee sessions, and confirmed that what he meant was that he hoped that Cairo would have a prominent role in pushing for the participation of representatives of the region in the Syrian political process.

To clarify this, Riyad Darar stated to (ANHA) agency, saying, “It was the journalist who fabricated the news, and I really talked about I hope that Cairo will have a role in advancing our participation in the upcoming political process in general.”

“We are counting on the development of the Cairo conference, which we will definitely contribute to,” Darrar added. 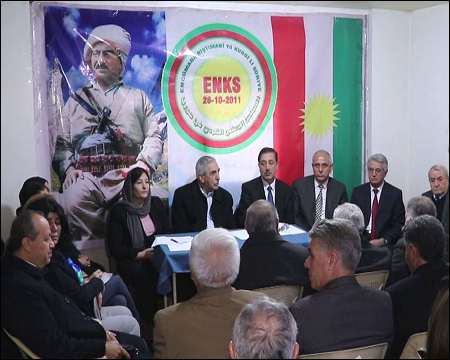 The decision was made by the pro-Turkey Kurdish National Council (ENKS), an umbrella group of opposition parties in a Friday meeting in Qamishlo city.

The self-administration in Syrian Kurdistan NES said in a December 17 statement that they would allow the ENKS to reopen offices in the region – shut down by the ruling authorities in 2016.

A number of significant developments under way in Syria reflect the confusing strategic situation in the region, as a variety of players compete for supremacy. The forces engaged include global powers, regional powers and sub-state forces – and combinations of the above. No player or group of players is currently able to conclusively vanquish the others and then arrange affairs according to its will. This situation reflects the conclusive disappearance over the last decade of the post Cold War order in the region, and the emergent fierce competition to fill the vacuum it has left.

END_OF_DOCUMENT_TOKEN_TO_BE_REPLACED

26/12/2019 SYRIAAHR  – The Syrian Observatory for Human Rights learned that members of the Turkish-backed of the Turkish military operation, “Peace Spring”, tried to escape from the operation areas in Tal Abyad, where they offered the Syria Democratic Forces to withdraw and hand over all their heavy weapons and weapons they have; in exchange for opening a road for them to move to Manbij so that they can escape from it to Jarabulus then Idlib.

According to a very reliable SOHR source, the “Syria Democratic Forces” agreed to the offer and prepared several buses to allow them to move to Manbij, but the Russian forces refused it completely, reliable sources said that “a large number of members of these factions are still arriving in the area in order to escape to Idlib.”