MESOPOTAMIA NEWS : THE BARZANI PALLACES IN US – MONEY STOLEN FROM KURDISH PEOPLE 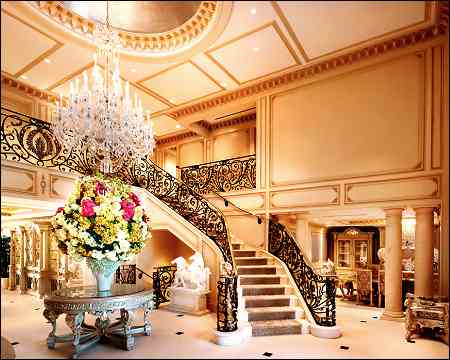 LOS ANGELES,— Rodeo Drive in Beverly Hills is one of Southern California’s biggest tourist draws outside of Disneyland, its glitzy collection of designer boutiques — Chanel, Hermès, Bottega Veneta and more — forming their own sort of Magic Kingdom to lure gawkers, and sometimes serious shopalm tree-lined streets, frequently stopping to allow occupants to photograph this or that celebrity’s house.

But on a busy avenue just a few blocks from Rodeo, one house draws attention despite not having a Hollywood pedigree. Maison 613, as the property is known, was long owned by a non-famous businessman, yet lookie-loos flock to the property. On a recent Sunday, a slow-driving Nissan pulled over across the street from the house, the driver emerging with a tripod camera to snap pictures.

pers, from around the world. The residential streets just north of the main shopping drag have their own peculiar theme park-like quality, too, with rows of ornate mansions and perfectly manicured yards.

The city’s omnipresent tour buses have taken to meandering up and down these pIt’s not hard to see what fascinates the tourists. Watch a marketing video for the property, and the magnitude of Maison 613 comes into focus. Up for sale two years ago with a $40 million pricetag, the listing boldly proclaimed that the house “sets a new standard for elegance, beauty and sophistication in the residential landscape of Beverly Hills.” Perhaps that’s true, but the colossal structure also utterly obliterates its neighbors in sheer size alone. Within the mega-mansion’s nearly 21,000 square feet of gilt-trimmed living space are a beauty salon, elevator, indoor basketball court, 17 bathrooms and even a bowling alley. And from the street, the European-influenced architecture invokes Versailles, its towering limestone face festooned with a bonanza of Corinthian columns, intricate moldings and decorative quoins. The house looks like money — a remarkably showy sort of money. 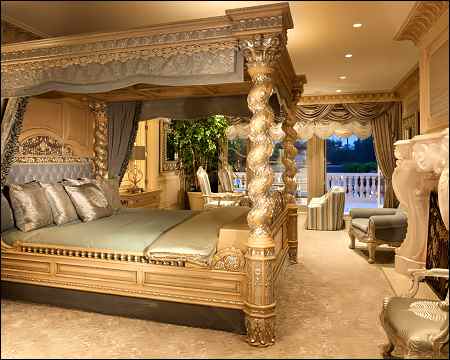 A mile north of Maison 613 lies another mansion that might as well be its older, slightly smaller sister. Foothill Manor, as it is known, was built in the 1970s and spans “just” 12,000 square feet, yet is every bit as opulent as Maison 613, with more Corinthian columns, hand-carved architectural moldings and gold leaf everywhere. It’s also more private than Maison 613, with its perimeter a forest-like collection of mature plantings. But the house is so tall that even the giant trees surrounding it can’t shield its roofline from public view.

Yet even though Maison 613 and Foothill Manor were designed to impart conspicuous wealth, the names of their current owners are shrouded in secrecy. Maison 613 sold last year for $27 million in an all-cash deal, according to records, one of the biggest transactions ever closed in the Beverly Hills Flats neighborhood. The listed buyer, an LLC, is named after the property’s address and links back to a small, nondescript law office in Fairfax, Virginia.

Just three months before Maison 613’s big sale, Foothill Manor transferred for $20 million in another all-cash deal. Again, the listed buyer is a mysterious LLC named after the property’s address; it, too, was registered by the same Virginia law office. As Nick Shaxson once neatly put it for Vanity Fair, there are only two things we can say with certainty about the new owners: “They are extremely wealthy, and [they] … don’t want you to know who they are and how they got their money.”

Dive deep into records, however, and one name is linked to both Beverly Hills properties: Haval Dosky, a Virginia-based, ethnically Kurdish man with longstanding ties to Mansour Barzani, a prominent son of former Iraqi Kurdistan president Massoud Barzani.

For centuries, the Barzani family have been the de facto rulers of the Middle East’s autonomous Kurdistan region, currently based the mountains north of Baghdad, Iraq. Though Kurdistan exists strictly as an imaginary country, the Kurdistan Regional Government (KRG) has its own legislature, army and foreign policy, essentially making it a state in all but name. And the Barzanis’ influence among the Kurds is so great that supporters and critics alike have coined the cheeky nickname Barzanistan for the oil-rich region. From 2005 to 2017, Masoud Barzani served as president of the KRG, during which time he established himself as one of the U.S.’s staunchest allies in the Middle East.

Barzani’s tenure as president was also marred by controversy. Critics alleged that he and his family secretly held a virtual monopoly on various commercial businesses, reaping tens of billions from their telecommunications empire and other endeavors. Though Barzani himself denied any involvement with commercial enterprises, a local newspaper accused Barzani and his Kurdistan Democratic Party of collecting large profits from illegal oil smuggling into Iran. And a $47 million purchase of Beverly Hills real estate by his sons could be construed as providing evidence of some form of corruption.

But stories of the Barzani sons’ vast wealth are nothing new. Though he’s publicly issued a denial, avid real estate watchers widely believe that Masrour Barzani was the anonymous buyer of a gigantic mansion in McLean, Virginia, that ranks as one of the largest homes in the entire state. (The ornate house, immodestly christened Chateau Noble de McLean, bears an almost eerie resemblance to Maison 613 and Foothill Manor.) And if local reports are to be believed, Mansour Barzani once lost $3.2 million in a single night while gambling at a Dubai casino.

Back in Beverly Hills, determining exactly who owns Maison 613 is made more complicated by the fact that the Barzanis don’t actually seem to live in this house. Nor does anyone, for that matter. A recent visit to the premises found there were various weather-damaged neighborhood flyers stuck in the front gate, as if the property has been vacant for some time. There are no cars in the drive; at night, the house remains conspicuously dark.

Much like Maison 613, Foothill Manor is also vacant. Signs posted on the driveway gate state that a major interior remodel of the home has recently begun, rendering the place uninhabitable. But according to neighbors, the giant house was occupied for most of the past year by Sodabeh “Soodi” Khoshdaman, a U.K.-based woman who they said is a mistress of one of Masoud Barzani’s sons, and the mother of a boy carrying the Barzani surname.

Whatever Khoshdaman’s actual ties to the Barzani clan, they appear to have reaped extraordinary financial rewards for her. British land registry records reveal that in December 2016, she paid £10.9 million (approximately $14 million USD at current conversion rates) in an all-cash deal for a fixer-upper house in London’s shockingly expensive neighborhood of Kensington, the same pocket of town where other residents include Formula One racing heiress Tamara Ecclestone, Abu Dhabi’s Sheikh Mansour, Roman Abromovich and Lakshmi Mittal, one of India’s richest men. And, of course, the Duke and Duchess of Cambridge.

Like Foothill Manor, however, Khoshdaman’s London residence is currently unoccupied, the property engaged in a multi-year, multimillion-dollar renovation and expansion that includes the addition of a full basement level. The local refurbishment specialists at BTL Property Ltd have been hired, surely at massive expense, to design and oversee the home’s extensive remodel. And when complete, the Khoshdaman mansion will quite possibly rank as the largest and most lavish house on her block — a block in what is arguably the poshest area of London. 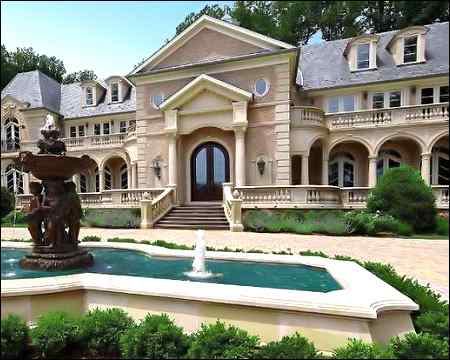 The extravagance of these Virginia, Beverly Hills and London homes is unfathomable to other Kurds, many of whom struggle to earn a living. About 5.5% of Iraqi Kurdistan’s population subsists on less than $80 per month, and while the region is economically prosperous compared to the rest of Iraq, even the reasonably successful Kurdish doctors only earn the monthly equivalent of a couple thousand USD. On top of that, there is widespread political unrest — last month, President Trump made the controversial decision to pull U.S. troops out of Syria, a move harshly criticized by the Barzanis and other prominent Kurdish politicians, who described it as “a stab in the back.” Since the troop removal, 130,000 Kurds have fled their homes, and hundreds more have reportedly been slaughtered.

All that bloodshed seems worlds apart from the manicured neighborhoods of Beverly Hills. On a recent Sunday afternoon, the only thing disturbing the peace is a black Range Rover, whose driver honks at a Lexus for pausing too long at a nearby stop sign. On the sidewalk, a young Asian tourist strolling along stops in front of Maison 613, gazing up at it for a few seconds before turning to face the street. Behind him, the home’s towering façade looms cold and dark, like a residential version of Mount Rushmore. Then he raises his camera and snaps a selfie.