MESOPOTAMIA NEWS SUGGESTION : Massive demonstrations are expected to be held against Assad and Iran in Deir Ezzor next Friday

The demonstrations will be held under the slogan “no peace, no stability except by expelling Assad and Iran” to emphasize the continuity of the revolution and the need to expel Assad regime and its allies, the iranian militias.

According to sources of Deir Ezzor 24 network, dozens of areas in Deir Ezzor countryside are preparing for the demonstrations to send their message that Assad and Iran are the source of terrorism in the region.

It is indicated that in the recent months, people have staged many demonstrations to demand Assad regime and the Iranian militias leave the areas they control in the eastern Euphrates.

It is worth mentioning that the demonstrations are expected to be the largest in the region, as many areas will participate in them to emphasize the continuity of the revolution and the need to unite against Iran and its projects. 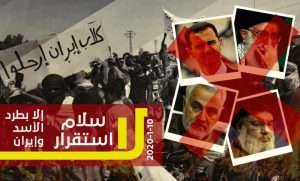