US sends new map of Israel, including Golan, as gift to Netanyahu

US President Donald Trump’s son-in-law and adviser Jared Kushner has given a new map of Israel, which included the occupied Syrian Golan Heights, to Israeli Prime Minister Benjamin Netanyahu. In a press conference held in Jerusalem, Netanyahu announced that he had received this gift through Kushner, the chief architect of the US “deal of the century”. 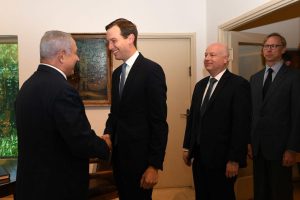 Netanyahu showed the map, which was officially issued by the US State Department and signed by President Trump, to journalists during the press conference.

This comes after President Trump recognised full Israeli sovereignty over the Golan Heights in March, during a visit by Netanyahu to the White House. The measure was denounced by the international community, given the territory’s status as occupied following the 1967 War.