MESOP STRATFOR ANALYSIS : NOT REALLY CONVINCING – NOBODY PREPARES A COUP WITHOUT CERTAIN WARRANTIES & HALF WAY SECURE PERSPECTIVES – WHO TOLD THEM ? – They were at the end surpised by their own defeat.

July 16, 2016 | 19:10 GMT – Analysis – STRATFOR INTELLIGENCE USA – The coup attempt that saw the Turkish state plunged into crisis has come at precisely the wrong time for Ankara. Just over the border in Iraq and Syria, critical challenges are mounting, as Turkey is drawn deeper into the fight to contain the Islamic State. Internally, Turkey is combating its own domestic Kurdish militant movement, the Kurdistan Workers’ Party (PKK). Because the coup emerged from within certain divisions of the military, the government of President Recep Tayyip Erdogan and his Justice and Development Party (AKP) must now engage in heavy purges of the armed forces. This will make it difficult for Ankara to use the military as an instrument of policy and national strategy. The coup has been put down, but the aftershocks could hamstring Turkey for a long time to come.

A notable minority of the Turkish military leadership supported the coup. Although the plot had been in the works for some time, the conspirators were pushed to act rapidly when they became aware of an impending crackdown during the Aug. 1 military rotation, which would have resulted in some conspirators forced into retirement. Among the plotters were factions from three separate Turkish armies: the 1st Army, the 2nd Army and the 3rd Army. The plot also extended to a number of Turkish Air Force units. On July 15, the coup planners mobilized aviation and armor units in a coordinated surprise operation while President Recep Tayyip Erdogan was vacationing in the southwestern city of Bodrum. 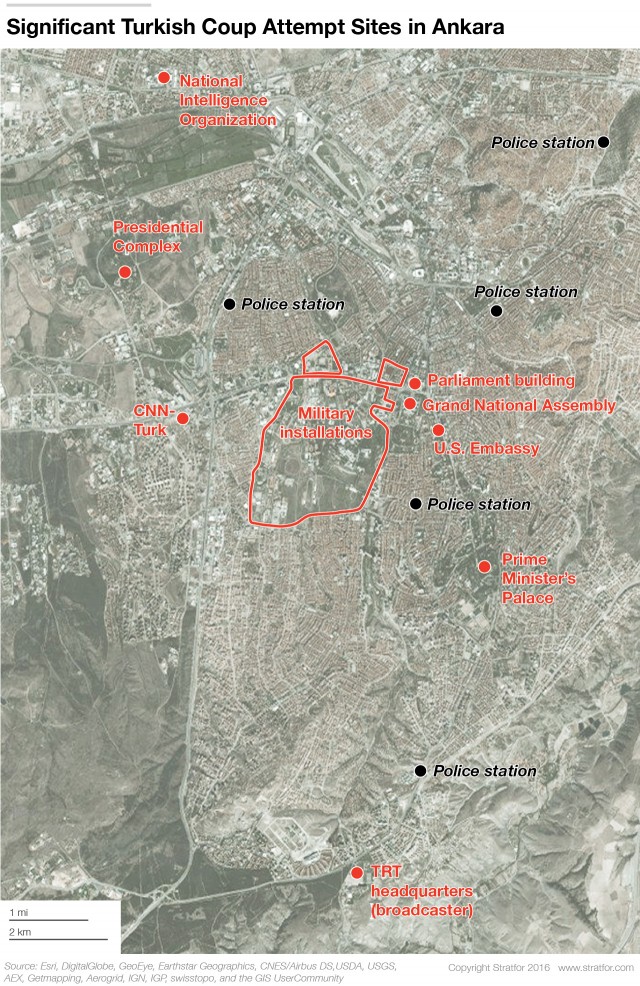 When Erdogan finally managed to make it to Istanbul by airplane, he went on television and alleged the coup plot leaders were affiliated with the Gulenist movement, led by exiled opposition leader Fethullah Gulen. Gulen issued a statement denying this and condemning the coup, but that will not stop Erdogan from purging the military of Gulenist remnants. Many of the coup leaders reportedly have ties to the Gulenist movement, including the former Chief of Staff of the Air Force Akin Ozturk, Colonel Muharrem Kose, and Ozturk’s son-in-law, Halkan Karakus, a helicopter pilot. In addition to over 2,800 soldiers, the Turkish government has arrested high-ranking active duty officers. Now in detention are 2nd Army commander Gen. Adem Huduti and the 2nd Army executive officer and Malatya Garrison Commander Avni Angun and 3rd Army commander Erdal Ozturk.

Erdogan and his supporters have long been paranoid about a potential military coup — Turkey has had four since 1960. The president will now implement a swift and forceful crackdown, which could easily escalate into an outright purge. Any member of the Turkish armed forces with even a tangential link to the Gulenist movement may face arrest.

This has happened before. The aftermath of the Ergenekon anti-government plot and “Operation Sledgehammer,” an alleged plan by factions within the Turkish military against the Justice and Development Party (AKP) dating back to 2003, led to just such a crackdown. The government arrested almost 400 military personnel, including retired officers. The detainees then faced prosecution for plotting a coup. Although the vast majority were eventually acquitted, years of trials and mistrust eroded the Turkish military’s confidence and weakened its combat effectiveness.

The upcoming crackdown following the July 15 coup will further erode the military’s capabilities. It will erode morale and lessen fighting cohesion. The arrest and imprisonment of combat leaders as well as quartermaster and military logistics administrators will increase disorganization and cause confusion among the ranks. Training schedules will be thrown into disarray as routine exercises are postponed or canceled. Mistrust will spread. Planning for military operations will become more difficult as the government reforms its command and control structures. The government might try to ameliorate some of these problems by restoring military personnel previously ousted by by the Gulenists themselves, but this will not happen quickly.

The Curse of Timing

This could not come at a worse time. The Turkish military is heavily engaged in fighting the Kurdistan Workers’ Party (PKK) and entangled in Syria and Iraq. A military weakened in the aftermath of a failed coup will present Ankara with fewer tools to handle these challenges. The much-touted possibility of a Turkish military push into Syria is now too risky. This is also true of an expanded Turkish military presence in Iraq, as the push to drive the Islamic State from Mosul gears up. Turkish operations against the PKK may also suffer, though it is unlikely that they will grind to a complete halt.

Turkey’s military incoherence will also complicate regional efforts by other powers. U.S. efforts against the Islamic State rely heavily on Turkey as a base for air operations. Washington also relies on Turkey to cut off the logistical lines to the extremist group. With Ankara distracted, support for its rebel proxies in Syria may also wane. This would weaken an already beleaguered rebel movement. For the Kurdish People’s Protection Units (YPG) in Syria, Turkish infighting could provide an opening to expand and connect Kurdish-controlled territorial pockets.

On paper, Turkey’s military appears one of the most powerful in the region. But low morale and dissent often reveal the cracks in a military’s perceived strength. These hidden weaknesses are often masked by massive troop numbers and modern equipment, only becoming clear during mutinies and coups. The Turkish military will now need to turn inward to deal with the disruptive effects of the attempted coup — and the threat this coup posed to the ruling party. It will take years for Turkey’s armed forces to recover. These are years that Turkey does not have. Instability in the region is only deepening, and Turkey desperately needs to help contain this chaos while building up its own position.