The Trotskyist León Sedov Brigade in the Syrian Revolution

The León Sedov Brigade were a rare phenomenon in the Syrian Revolution and the conflict which followed. While almost all of the armed Syrian Opposition could be categorized as either Free Syrian Army (FSA) originally made up of deserters and officers of the Syrian Arab Army or independent Islamists whose ideology varies greatly, León Sedov Brigade stand out as fitting into neither of these categories. For the period that the Brigade fought as a distinct armed group, they were an internationalist leftist organization of workers who put Trotskyist theories of permanent revolution and the forming of united fronts into practice, battled the Assad regime, defended themselves against the YPG, and rejected the involvement in Syria of what they regarded as imperialists (the US, France, UK, and their proxies including Turkey and Gulf states such as Qatar) and countries whose leadership they have harshly criticized such as Russia and Iran. The key to understanding the Brigade today is the Fracción Leninista Trotskista Internacional (FLTI), and it is three of their members who I spoke to in order to gain more insight into their role in the conflict.

The story of the León Sedov Brigade begins not in Syria, but Libya. During an interview with founding member of the Brigade Abu Muad, journalist Leandro Hofstadter (who was on the ground in Syria at the time the Brigade were militarily active), as well as fellow FLTI member and co-author of the book Syria Under Fire: A Bloodied Revolution Carlos Munzer, I was able to get key details of how the group came to be formed, their ideology, and their activities. The FLTI have their base of support in South America and I was able to talk to them in November, 2017. Abu Muad had previously visited Palestine and fought in the 2011 Libyan Revolution, aiding the rebels there to successfully overthrow the regime of dictator Muammar Gaddafi. During this time, Muad was shot in the head by a sniper in Misurata, Libya — he mentioned the bullet from this wound hasn’t been removed and causes metal detectors to go off at airports. During the fighting in Libya, Abu Muad was thought to have been killed until two Argentinian journalists found him still fighting on the battlefield along with the Libyan rebels and recorded an interview with him. The following year, Abu Muad formed the León Sedov Brigade while still in Libya on June, 2012 with 10–12 other individuals from across the Maghreb. Named after Leon Trotsky’s son Lev Lvovich Sedov, they believed this group would form the nucleus of a leftist movement that would help spread the revolutions of the Arab Spring across the Maghreb and the Middle East. Upon seeing the emerging situation in Syria, they believed this was the best place to continue the struggle and entered the country via the then porous border with Turkey for the first time in July, 2012. It is worth noting that the experience of the South American revolutionary Abu Muad has some parallels with Libyan-Irish revolutionary Mahdi al-Harati, who took part in the Libyan Revolution as part of the famous Tripoli Brigade before also traveling to Syria to continue fighting for the Arab Spring by forming and leading the group Liwaa al-Umma in 2012. 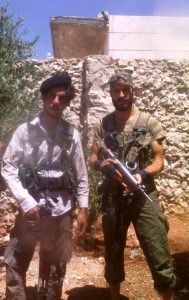 They were beset by adversity immediately, as 5 members abandoned the Brigade soon after arriving when seeing the difficulties that confronted them in the North of Syria. However, the remaining members carried on by establishing a base of operations in Aleppo city, and were able to count 200 mostly Syrian members among their Brigade at its peak according to Abu Muad (with some members as far afield as Daraa and Homs). The most notable members were Abu al-Baraa and his father Mustafa Abu Jumaa, the latter of whom the FLTI consider the founder of Syrian Trotskyism. Although apparently the largest leftist group active among the Syrian Opposition, León Sedov Brigade were not unique in this respect as at least one other significant leftist Syrian Opposition group is known to have existed — Faction to Liberate the People was affiliated with the Marxist political organization Revolutionary Leftist Movement in Syria, they numbered less than 60 and were active in Hama, Aleppo and even Kobanî in Raqqa between June 2014 and late 2015. An important characteristic of León Sedov Brigade is that it was made up of worker militia and not soldiers — they would earn money in factories and through construction work then use it to fund excursions to different battle fronts. Leadership of the Brigade was voted upon and rotated.

It is important to note that groups using leftist symbolism and rhetoric have appeared on other sides of the Syrian conflict, often involving non-Syrians. On the side of the Assad regime, Mihraç Ural leads the Syrian Resistance (Arabic: المقاومة السورية), the only significant overtly leftist regime militia of its kind. Ural is a Turkish Alawite with a long history of militant group activity who was infamously involved in the killings of tens of civilians at the Sunni villages of Bayda and Baniyas in Tartus, 2013; the sectarian motives and implications of this war crime hardly need to be elaborated upon. Somewhat more controversially considered leftist, the Syrian Social Nationalist Party (SSNP) of Lebanon have sent volunteers to Syria, as have the Arab Socialist Ba’ath Party — Lebanon Region. Meanwhile, on the side of the Democratic Union Party (PYD) dominated and PKK-linked Syrian Democratic Forces (SDF), many leftist international volunteers mostly from the West and Turkey have fought in a multitude of minor groups. These groups and individuals tend to be most easily relatable to people in the West, with these foreign fighters and the SDF itself seeming to seize upon the obvious propaganda value of foreign female militia members espousing feminist rhetoric and young white males connecting the SDF’s US-backed fight against ISIS to Western based movements such as Antifa. An alleged group that was created in particular, a supposedly “LGBTQI” Battalion, was dismissed by the SDF itself as non-existent and harshly criticized by one Syrian commentator as “imperial” and “colonial.” It seems clear that this group TQILA, itself claiming to be a subgroup of another small and largely insignificant group of international volunteers known as IRPGF, was essentially a publicity stunt as the group has not been heard from since and there is no evidence to suggest it ever engaged in combat independently.

León Sedov Brigade heading to fronts to battle the Assad regime during the siege of Aleppo, Castello Road, North of Aleppo city

León Sedov Brigade state they participated in hundreds of skirmishes, assaults and sieges, which include some of the major battles of the conflict against the Assad regime from 2012 onward.