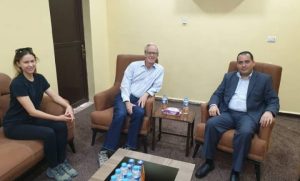 During the meeting, the U.S. ambassador stressed the importance of the international coalition’s presence in the region to ensure that Daesh will not return.

“The meeting was fruitful and good, during which we discussed continuing the fight against the cells of the terrorist organization Daesh, and ways to support the region to ensure its stability and to protect it from any threats, as well as supporting it economically with a number of vital projects.”

The meeting coincides with intensive security operations by the international coalition and the SDF in several areas of Deir Ezzor (east of the Euphrates) to search for remnants and cells of Daesh.