HEWLÊR-Erbil, Iraq’s Kurdistan region,— Iraqi Kurdistan’s counterterrorism forces on Thursday identified the lead suspect in their investigation into the deadly shooting a day earlier in Erbil that killed a Turkish diplomat and two others. 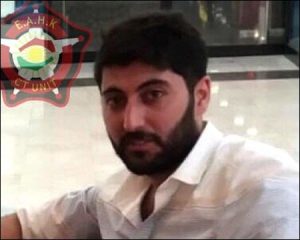 On Wednesday, a group of employees and diplomats from the Turkish consulate in Iraqi Kurdistan capital of Erbil were dining at HuQQabaz restaurant when a gunman suddenly opened fire on them. Two were killed instantly, including a high-level Turkish consular official, and another was critically injured and later died while receiving medical care at a nearby hospital.

“The name of the person whose photo has been released is Mazloum Dagh. He was born in 1992 and is from the [Kurdish] city of Diyarbakir in Turkey,” read a statement by the Counter Terrorism Department (CTD). “The aforementioned is wanted by the security agencies of the Kurdistan Region.”“We are calling on the good citizens to inform the security forces about any information [they might have] regarding this criminal,” the statement added.

The CTD’s claim that Dagh originates from Diyarbakir is likely to strengthen assumptions that the PKK was responsible for the attack since the city, known in Kurdish as Amed, is a well-known center of Kurdish cultural and political activity in Turkey. Iraqi Kurdistan Regional Government (KRG) released an update about the attack that killed three people at a restaurant in Erbil the previous day, characterizing it as a “premeditated terrorist attack.”

No group has yet claimed responsibility for the attack, but many observers speculate the involvement of the Kurdistan Workers’ Party (PKK)

But the spokesman for the armed branch of the Kurdistan Workers’ Party PKK’s denied the group was involved in Erbil’s shooting, AFP reported.A PKK official denied its fighters had anything to do with Wednesday’s shooting in Erbil, saying, “We have no information regarding the incident and only heard about it through the media.”

According to Turkish Cumhuriyet newspaper the killed Turkish diplomat was Osman Köse, 36, who was originally from Mersin in southern Turkey.Turkey’s President Tayyip Erdogan, the Kurdish security service and Iraq’s Baghdad-based foreign ministry condemned the attack.Turkish presidential spokesman Ibrahim Kalim vowed a response against “those who are responsible for this atrocious attack,” in a Twitter post in Turkish.