MESOPOTAMIA NEWS :  A SEVERE WARNING TO TEHRAN ! – [PICTURES]: B52 Bombers Arrive in Middle East: US

Basnews English 09/05/2019 – 12:48 Published in Middle East – ERBIL — The US Central Command (CENTCOM) has published photographs showing B52 bombers arriving in the Middle East. Two days earlier, Washington announced that it would deploy its aircraft carrier strike group and bombers to the region to protect the US forces and interests against threats from Iran.

“The B-52H can perform strategic attack, close-air support, air interdiction, offensive counter-air and maritime operations to support stability in the region,” CENTCOM describe the bomber on its official Facebook page. 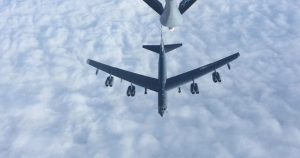 “The Bomber Task Force is deployed to U.S. Central Command area of responsibility to defend American forces and interests in the region.”

Tensions between Iran and US are fast heightening. US has announced new sanctions on Iran’s metal industry to cripple the country’s economy. In retaliation, Iran has threatened to reduce its commitment to the Nuclear Deal and resume its nuclear programme.