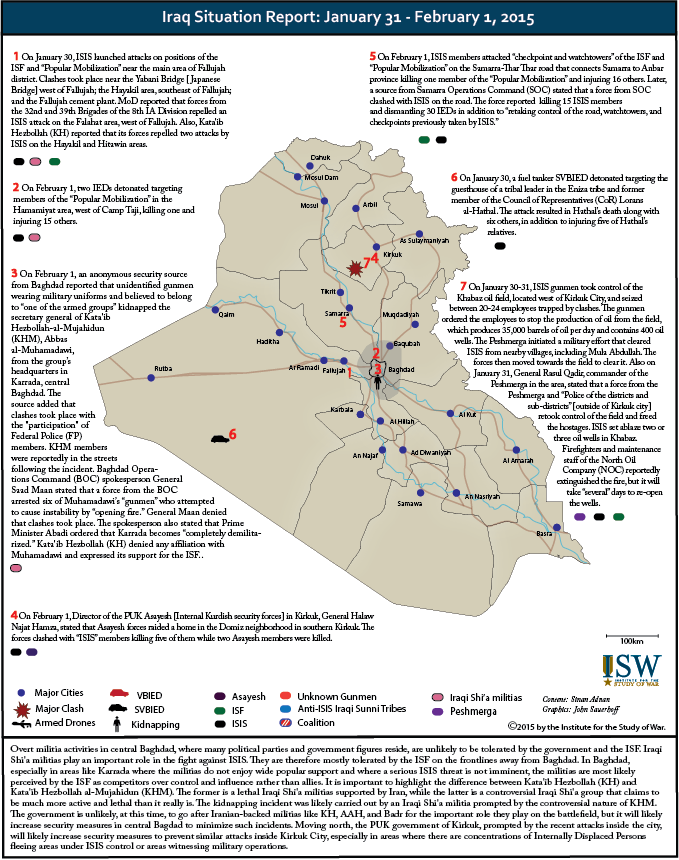 2 Feb 2015 – By Sinan Adnan – Key Takeaway: Overt militia activities in central Baghdad, where many political parties and government figures reside, are unlikely to be tolerated by the government and the ISF. Iraqi Shi’a militias play an important role in the fight against ISIS. They are therefore mostly tolerated by the ISF on the frontlines away from Baghdad. In Baghdad, especially in areas like Karrada where the militias do not enjoy wide popular support and where a serious ISIS threat is not imminent, the militias are most likely perceived by the ISF as competitors over control and influence rather than allies. It is important to highlight the difference between Kata’ib Hezbollah (KH) and Kata’ib Hezbollah al-Mujahidun (KHM). The former is a lethal Iraqi Shi’a militias supported by Iran, while the latter is a controversial Iraqi Shi’a group that claims to be much more active and lethal than it really is. The kidnapping incident was likely carried out by an Iraqi Shi’a militia prompted by the controversial nature of KHM. The government is unlikely, at this time, to go after Iranian-backed militias like KH, AAH, and Badr for the important role they play on the battlefield, but it will likely increase security measures in central Bagdad to minimize such incidents. Moving north, the PUK government of Kirkuk, prompted by the recent attacks inside the city, will likely increase security measures to prevent similar attacks inside Kirkuk City, especially in areas where there are concentrations of Internally Displaced Persons fleeing areas under ISIS control or areas witnessing military operations.