By Sinan Adnan – Key Takeaway: ISIS is going on the offensive in areas of strategic importance for the ISF and Iranian-backed militias to deny such forces freedom of movement between Samarra and its environs and the eastern Anbar front. The road on which ISIS has launched attacks in the past two days represent a strategic line of communication (LOC) for both the ISF and the militias on one side and ISIS on the other side. The attacks most likely originated from the Thar Thar region, north of Fallujah. This area has, so far, not witnessed a major effort by the ISF or the militias to minimize ISIS’s ability to launch attacks toward Samarra. 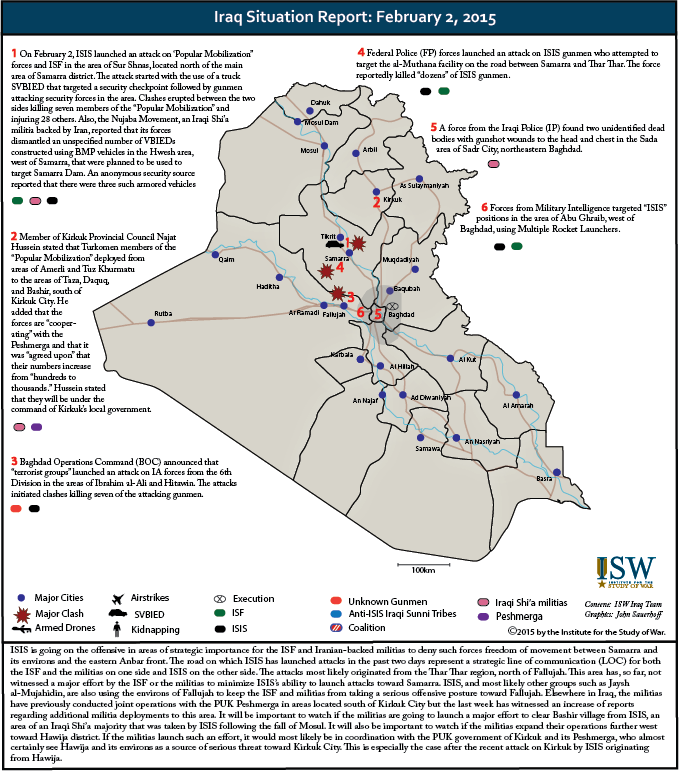 ISIS, and most likely other groups such as Jaysh al-Mujahidin, are also using the environs of Fallujah to keep the ISF and militias from taking a serious offensive posture toward Fallujah. Elsewhere in Iraq, the militias have previously conducted joint operations with the PUK Peshmerga in areas located south of Kirkuk City but the last week has witnessed an increase of reports regarding additional militia deployments to this area. It will be important to watch if the militias are going to launch a major effort to clear Bashir village from ISIS, an area of an Iraqi Shi’a majority that was taken by ISIS following the fall of Mosul. It will also be important to watch if the militias expand their operations further west toward Hawija district. If the militias launch such an effort, it would most likely be in coordination with the PUK government of Kirkuk and its Peshmerga, who almost certainly see Hawija and its environs as a source of serious threat toward Kirkuk City. This is especially the case after the recent attack on Kirkuk by ISIS originating from Hawija.