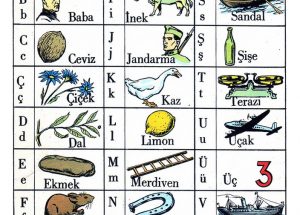 EXECUTIVE SUMMARY: In deeply polarized Turkey, words are not just words. It has been part of Erdoğan’s campaign to make Turkey more Islamic and more Turkish. In his view, this entails ridding the Turkish language of “foreign” words – but foreign, to Erdoğan, does not include Arabic.

What’s in a name? A good deal. You would risk offending a Turk if you called his country’s biggest city “Constantinople” instead of “Istanbul.” Your Turkish friend would probably not know that the word “Istanbul” morphed from “Eis tin Polin,” which means “to the city” – in Greek.

Consider my own case. I was born in Ancyra, with a grandfather from Georgia, who settled first in Rhizios; my mother was a proud Chalcedonian; my parents were laid to rest in Aivali. My childhood was spent in Smyrna and my military training in Amaseia; I was a conscript in Cevlik via El-Azez. Or consider President Recep Tayyip Erdoğan, who is from Potamia. His predecessor, another Islamist, is from Caesarea. His three predecessors, chronologically, came from Akroenos, Sparta, and Maldiye. The Turks owe their independence largely to a successful war at Gallipoli. Another great day in the history of the Turkish Republic was Ataturk’s landing at Sampsus, where he launched the War of Independence. And the first capital of the Ottomans was Prousa.

Not one of those town names is Turkish. Even the contemporary word for the Turkish homeland, “Anadolu,” comes from the Greek word “Anatoli” (“east”).

Nevertheless, in deeply polarized Turkey, language is not just language. It has been part of Erdoğan’s campaign to make Turkey more Islamic and more Turkish. Remarkably, in 2014, Erdoğan lectured on a language he does not understand, speak, read, or write. “We once had a language [Ottoman] perfectly suitable for science,” he lamented. “Then it disappeared overnight [Ataturk’s alphabet revolution].” In 1923, only 2.5% of the Turks were literate, and only a fraction of them could speak Ottoman.

In many ways, Erdoğan’s passionate longing for a dead language is both ideological and Orwellian: “The revolution will be complete when the language is perfect” (George Orwell, 1984). Today, with the Ottoman language long forgotten, Erdoğan wants to rid Turkish of “foreign words.” Why? Because “Turkey faces a mortal threat from foreign ‘affectations.’”

Erdoğan recently said, “Where do attacks against cultures and civilizations begin? With language.” He then ordered the foreign word “arena” removed from sports venues across the country. Most “arenas” are now on their way to becoming “stadiums” or “parks” – both of which are also non-Turkish words.

Erdoğan’s language revolution is problematic for a number of reasons. To start with, his understanding of “foreign” reflects his powerful Islamist ideology.

Wikipedia describes a foreign language or word as “a language or word indigenous to another country.” By that definition, Erdoğan is right that “arena,” “mall,” “computer,” “tower,” and “check-up” are foreign words. But what about, for instance, “Tayeb,” the president’s own name, which means “good or kind” in Arabic?

In 2012, of the 27 first names belonging to ministers in Erdoğan’s cabinet, 20 were common Arabic names, two were the Turkish version of a common Arabic name, and only five were Turkish. Even the first-ever indigenous Turkish drone built and exhibited with fireworks had a Persian name: the Anka (“phoenix”).

In 2011, Favlus Ay, a Turkish citizen of Assyrian origin, appealed to a court to change his surname (which is Turkish for “moon”) to Bartuma, which has the same meaning in a Syriac language. The court refused his request, but Ay did not give up. Eventually, he appealed to the Constitutional Court to demand the cancellation of Article 3 of the Law on Family Names, the legal basis on which his appeal for the name “Bartuma” was denied. That article bans the use of surnames “belonging to foreign nations and races.” The lower court cited this article when it ruled against Ay’s appeal on the grounds that it was “against national unity.” The Supreme Court also ruled that Ay’s demand for the annulment of Article 3 of the Law on Family Names be rejected, again in order to maintain national unity.

One might think the ban and its legal basis are ridiculous. In fact, the whole story, when seen from a wider angle, is even more absurd than the ban itself. The president of the Supreme Court that ruled in favor of the ban on foreign names is named Hasim Kilic. Hasim (Hashim or Hasheem) is a common Arabic male name. Thus, a Syriac name apparently belongs to a “foreign race,” but an Arabic name does not. Are Turks Arabs? Do they speak the same language? Do they have the same ethnicity? We all know the answers to those questions.

The Turkish Islamist quest to rid the Turkish language of western words is fundamentally hypocritical. Erdoğan and other important men in Ankara are driven about in western-made cars; use western mobile phones, applications, and software; buy western-made weapons to defend their country; wear fancy western suits and neckties – but hate western words. As it happens, the Turkish word for “hypocrite” really is Turkish.

Burak Bekdil is an Ankara-based columnist. He regularly writes for the Gatestone Institute and Defense News and is a fellow at the Middle East Forum.