READ IN:    עברית Ben Caspit June 26, 2019 Article Summary   al monitor  “& jUNE 2019 – At a trilateral meeting in Jerusalem, the national security advisers of Israel, Russia and the United States confirmed their common interest in limiting the presence of Iranian forces in Syria when peace finally comes. 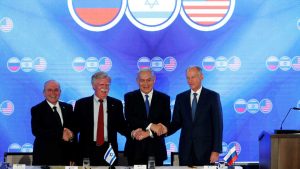 One photo from the June 25 tripartite summit of national security advisers in Jerusalem is worth a thousand words. It shows Israeli Prime Minister Benjamin Netanyahu, with US national security adviser John Bolton and Israel national security adviser Meir Ben-Shabbat standing to Netanyahu’s right and Russia’s National Security Council secretary, Nikolai Patrushev, to Netanyahu’s left. Netanyahu, with arms crossed, holds tight to Patrushev’s hand with his right hand and to Bolton’s hand with his left. With a particularly big smile across his face, the prime minister looks like the cat that swallowed the canary. Bolton’s smile is also one of satisfaction, while Ben-Shabbat looks like he can’t believe he’s actually there. Only Patrushev maintains a somewhat chilly, pensive countenance, like someone who finds himself at a party he would rather not be attending.

The tired old diplo-jargon that “the importance of the event is in its very existence” is particularly true as regards this historic summit. The big headline produced by the meeting was Patrushev’s dry statement that splashed cold water on the US-Israeli offensive against Iran mounted at Bolton’s instigation.

“Any attempts to make Tehran look like the main threat to global security, to put it in the same basket as ISIS or any other terror group, are unacceptable,” Patrushev told reporters. “Iran has been contributing a lot to the fight against terrorism in Syria, helping to stabilize the situation.”

Patrushev went on to say that Israeli airstrikes against Iranian military targets in Syria were “unwelcome,” adding that Russia and Iran have a joint anti-terrorism program: “We have ways of influencing each other and listening to each other … not through violence, but rather through dialogue.” To top it all off, Patrushev said that Russia has information showing that the US drone that Iran downed last week had entered Iranian airspace. In other words, it was a justified hit.
Read more: https://www.al-monitor.com/pulse/originals/2019/06/israel-us-iran-russia-syria-vladimir-putin-john-bolton.html#ixzz5rye3Qz3u