APR 26 -By: Jennifer Cafarella (ISW) -Primarily Islamist and jihadist rebel forces supported by al-Qaeda affiliate Jabhat al-Nusra (JN) seized control of the regime-held city of Jisr al-Shughour, southwest of Idlib City, on April 25, 2015. Jisr al-Shughour was a major regime stronghold in Idlib Province that many expected to present a difficult, hardened military target to anti-Assad forces. Reports prior to the fall of Idlib City to JN and rebel forces on March 28, 2015 indicated that the regime withdrew military assets to Jisr al-Shughour, possibly indicating regime intent to prioritize its defense over Idlib City. The fall of Jisr al-Shughour to JN and rebel forces is therefore a key indicator of the regime’s inability to defend terrain against increasingly coordinated anti-Assad forces without the assistance of Iranian proxies such as Hezbollah.
JN and rebel forces declared the “Battle of Victory” to seize Jisr al-Shughour on April 22, 2015. Anti-Assad forces made immediate gains following a JN VBIED attack north of the city allowing JN and rebels to seize three regimecheckpoints and advance into the city’s urban terrain. JN and rebel forces exploited their initial penetration to seize wide segments of the city despite considerable regime aerial bombardment. Regime forces withdrew on April 25,allegedly using civilians as human shields to cover their withdrawal, and reportedly executing 23 detainees held at the Military Intelligence Branch before withdrawing. JN and HASI each raised a flag in the central square of the city.
The operation was commanded and controlled through a newly established operations room, which coordinated the involvement of JN, Ahrar al-Sham (HASI), Jaysh al-Islam, Ansar al-Sham, and the jihadist Jabhat Ansar al-Din coalition. The offensive also included participation from the primarily Chechen jihadist group Junud al-Sham in addition to the Turkistan Islamic Party in Syria. Two FSA-affiliated groups, the First Coastal Division and 13th Division, also participated, according to videos uploaded to YouTube of the groups firing TOW anti-tank missiles near the city. The coordination of this offensive through a joint operations room with large JN participation and likely leadership represents a second major success for JN in northern Syria. JN established a model for the command and control of joint offensives in the Jaysh al-Fatah operations room that seized Idlib City on March 28. This victory likely incentivized rebel forces to buy into a JN-led operation at Jisr al-Shughour. JN cements its value to Syrian rebels and deepens its foothold in Syria by providing rebel forces with an effective vehicle for establishing unity of effort against the Assad regime, and by directly contributing to battlefield success. The increasingly Islamist and jihadist composition of rebel ranks in northern Syria, in part generated by JN’s action to sideline prominent moderate factions, furthermore strengthens JN’s position in northern Syria.
The offensive to seize Jisr al-Shughour was one component of a larger campaign to seize control of the entirety of Idlib Province and to connect rebel systems in Idlib to rebel-held terrain in northern Hama Province. As JN and rebels consolidate in Jisr al-Shughour, two additional offensives are still ongoing. The first, undertaken by the Jaysh al-Fatah operations room, seeks to seize control of remaining regime strongholds south of Idlib City. A major Jaysh al-Fatah offensive is currently underway against the Qarmeed and Mastouma military camps, with likely intent to advance on the regime stronghold of Ariha next. Prior reports indicated that the regime deployed its elite “Tiger Forces” unit to reinforce this area, however the regime’s inability to resupply or further reinforce these positions after the fall of Jisr al-Shughour may enable JN and rebel success. Meanwhile, HASI, Ajnad al-Sham, and other rebel groups continue the “Battle to Free Sahel al-Ghab” to push north through the al-Gahb plain in an attempt to eliminate a regime-held “buffer zone” that separates rebel-held terrain in Hama and Idlib Provinces from the Alawite-majority province of Latakia. This offensive has made considerable gains, seizing numerous towns in the countryside south of Jisr al-Shughour. Together these three offensives are likely to provide sufficient momentum to JN and rebel forces to accomplish their objectives in Idlib Province, and will likely position anti-Assad forces for possible future operations to penetrate key regime terrain in the coastal Alawite heartland in Latakia Province. 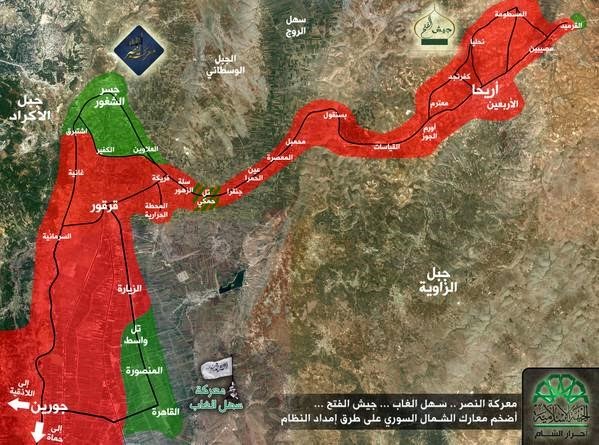 Map released by Ahrar al-Sham via Twitter, April 25, 2015 depicting the three underway offensives
The ongoing JN and rebel gains in Idlib Province in 2015 have dealt a considerable blow to the Assad regime. They have furthermore demonstrated an increasing sophistication of rebel campaign design, likely enabled by JN’s deepening role. The Jaysh al-Fatah and Sahel al-Ghab operations facilitated the seizure of Jisr al-Shughour by limiting the regime’s ability to reinforce across fronts, while simultaneously pursuing linked objectives. Combined with the successes of rebel forces in southern Syria beginning in late 2014, the seizure of Idlib City and Jisr al-Shughour could indicate that the momentum of the war has turned against the Assad regime. A reinvigoration of rebel combat power has been provided in part by JN’s model for coordinating joint military operations, which has enabled anti-Assad forces to break the stalemate that has characterized Syrian front lines for over a year. Syrian rebels are unlikely to win the Syrian war even with increasing support from JN, but will likely continue to achieve tactical and operational successes. This could force the regime to make hard decisions about the terrain it is able and willing to defend, possibly leading to a contraction in the regime’s deployed military assets as JN and rebels exploit these successes. Alternately, regime commitment to its “army in all corners” strategy could sustain an overextension of Assad’s military power that will continue to provide vulnerable targets to JN and rebel forces outside of major urban centers. The regime’s response to the growing momentum of anti-Assad forces in northern Syria will therefore offer wider lessons regarding the likely trajectory of the Syrian war in 2015.
Posted 44 minutes ago by Institute for the Study of War