Here Are The Payments To Hunter Biden, Leaked From Ukraine / THE “DEMOCRATS”

The information below has been leaked from the Ukrainian General Prosecutor’s office and acquired from intelligence sources within Ukraine; it is part of investigative materials acquired during an investigation into Biden corruption. As CD Media has reported previously, the National Anti-Corruption Bureau Of Ukraine (NABU) has succeeded in shutting down all investigations into Hunter Biden, Joseph Biden, Burisma owner Mykola Zlochevskiy, former Ukrainian President Petro Poroshenko, and former Polish President Aleksander Kwasniewskiy. NABU is controlled by Obama/Soros linked operatives and was created to coverup Democrat, Biden, Deep State, State Department corruption during the Obama Administration and the years after in which this cabal went after duly-elected President Trump. 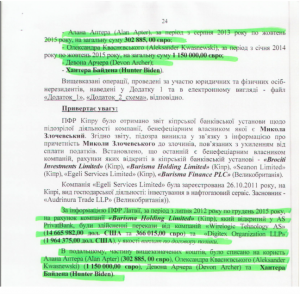 Prosecutors who desire the information to get out in spite of the Deep State’s efforts to prevent such a release and prevent investigations to continue, have leaked to CD Media.

According to the Department of Financial Monitoring (Counter-intelligence) of Latvia, the following sums of money were obtained from Busima Holding Limited (Cyprus) to the account of Burisma Holding Limited (Cyprus) which is open at AS PrivatBank in Latvia: money transfer of 14 655 982 US Dollars and 366 015 EUR from the company “Wirelogic Technology AS”, and 1 9 64 375 US dollars from “Digitex Organization LLP” based on the credit agreements. (Note: credit agreements here mean “intra-company” transactions to decrease the taxes to be paid or “credit agreement” also serve as means of hidden dividend payments).

Further, the part of the sums described above, the money was transferred to Alan Apter (302 885 EUR), Alexander Kwasniewski (1 150 000 EUR), Devon Archer and Hunter Biden.

BURISMA HOLDINGS LIMITED during a period from 18th November 2014 to 16th November 2015 transacted 45 money transfers through MORGAN STANLEY SMITH BARNEY LLC in the sum of 3.5 mln US Dollars. The recipient of the money transfer is the company Rosemont Seneca Bohai LLC (belongs to Devon Archer).