MESOPOTAMIA NEWS : #Turkey has become a convenient proxy power for #Russia and for #Assad and #Iran for that matter.

According to a parliamentary question, a copy of which was obtained by Nordic Monitor, Ünal Çeviköz, deputy chairperson of Turkey’s main opposition Republican People’s Party (CHP), Turkey and Russia signed a secret agreement allowing Turkish-backed Free Syrian Army (FSA) forces to attack areas controlled by Kurdish People’s Protection Units (YPG) in Syria. According to Çeviköz, a former ambassador, Turkey had to agree in return to withdraw its troops and military equipment from Idlib. 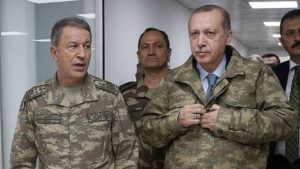 On May 6, 2019 Çeviköz submitted a parliamentary question asking Foreign Minister Mevlüt Çavuşoğlu if the claim was true. The minister declined to respond to the question, although he was obliged to provide an answer within two weeks, according to Article 98 of the Turkish Constitution.

Turkish-backed groups have simultaneously launched offensives in territory held by the YPG and seized some villages since 2018. This agreement might have forced Russia to remain silent during the attacks.

Çeviköz also accused the Turkish government of interfering in Syria’s domestic politics and sought information on a possible date for direct contact with Syria, security measures preventing terrorist groups from entering Turkey if they are forced to leave Idlib and the reason behind accepting the very difficult task of ensuring the separation of radical groups from moderate opposition groups in line with the Astana/Sochi process to resolve the Syrian conflict.

Since Turkey considers Kurdish forces terrorist groups and a threat to its national security, it has long threatened to unilaterally attack the YPG, which controls large swaths of northern Syria. To this end the Turkish government focused on gaining support from international actors in Syria for its military interventions. The US indecisiveness in Syria has pushed Ankara closer to Moscow. It appears that Turkey wanted to strike a deal on the Kurds with Russia, which could then cause the US to change its mind.

Çeviköz is believed to have picked up on the secret deal from his extensive contacts in the Foreign Ministry, where he had served for years and is well respected among members of Turkey’s foreign service.

A joint statement by the Turkish Defense Ministry and the US Embassy in Ankara on August 7, 2019 suggests that the US has been trying to counter the Russian deal. According to the statement Turkey and the US have agreed to establish a joint operations center in order to coordinate and manage the setting up of a safe zone in northern Syria. The US-Turkey agreement makes no mention of the size of the border zone nor the YPG presence in the area but acknowledges the Turkish government’s intent to return Syrian refugees to their homeland.

The latest Human Rights Watch (HRW) report revealed that Turkish authorities detained hundreds of Syrians and then deported them to Idlib and the northern Aleppo Governorate through the Cilvegözü/Bab al-Hawa border crossing. A new safe zone in northern Syria would provide Turkey an important opportunity to increase the forcible return of Syrians.

It is also possible that when Turkey withdraws from Idlib in line with the secret agreement, it could resettle radical groups who are forced to leave Idlib among Syrian refugees in the safe zone.

Idlib is the only large region in Syria that is still controlled by illegal armed groups. In May 2017 Russia, Turkey and Iran, the three partners of the Sochi process, agreed to establish de-escalation zones in Deraa, Eastern Ghouta, Homs and Idlib. Turkey did not volunteer to assume any responsibility in the first three de-escalation zones but was interested in Idlib. In the same year, a northern de-escalation zone was set up in Idlib to give shelter to militants and their families.

When the Syrian government prepared to launch an Idlib offensive, the Russian and Turkish presidents met in Sochi, on September 17, 2018, and their talks resulted in an agreement to establish a demilitarized zone in Idlib, which was to be 15-20 kilometers deep. Under that deal, Turkey deployed forces in Idlib at a dozen positions around the rebel-controlled northwestern province, where it has set up observation posts to prevent an escalation between Syrian government forces and rebels.

However, Turkey was accused of being too soft on and supporting Hayat Tahrir al-Sham (HTS), the latest incarnation of the al-Nusra Front, which was al-Qaeda’s official affiliate in Syria. It was Turkey’s responsibility to prevent those groups from conducting attacks on Syrian soil. In the months since the agreement was signed, Idlib has been taken over by the militants of HTS, and it has become one of the strongest militant groups in northern Syria. Today, HTS largely controls Idlib province, including the provincial capital and the border crossing with Turkey at Bab al-Hawa.