Hassan Salih, the leader of the newly-created Kurdistan Unity Party. Syria Rojava KNC Yekiti – 6 June 2019 –  ERBIL (Kurdistan 24) – One of the key parties within the umbrella organization of Syrian Kurdish groups known as the Kurdish National Council (KNC) has split into two separate factions.

The Kurdish Union Party in Syria (PYK-S – Yekîtî), commonly referred to simply as Yekîtî, was established in 1992. Three of its leaders, Abdulbaqi Yousef, Abdulsamad Xalaf Biro, and Hassan Salih, have just announced that they have left to form the Kurdistan Unity Party. 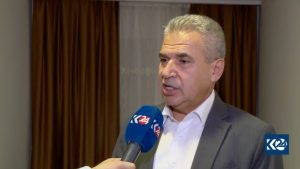 Yekîtî was one of the founding organizations of the KNC, created in October 2011 with support of Kurdistan Democratic Party (KDP) leader Masoud Barzani, also former president of the Kurdistan Region. It has been one of the main political opponents of the Democratic Union Party (PYD) and has split once before in 1997 when former members resigned to form another group with the similarly-named Kurdish Democratic Unity Party.

Such confusing splits among Syrian Kurdish parties are a familiar phenomenon, with multiple factions having done so again and again since the creation of the first one in the 1950s, experts say.

“The different rival Kurdish parties that originated in the historic PDK-S [Kurdistan Democratic Party of Syria] from 1957 have a long history of splitting in[to] rival fractions,”Yekîtî Politburo member Ibrahim Biro denied the new split was caused by political disputes and that the leaders of the new party had instead been ousted and their group would not be allowed to join the KNC.

“When there are political disputes in a political party, as they claim,” he told Kurdistan 24, “they would not be able to nominate themselves for the leadership and secretary of that party. They attempted to divide the party during the congress. They carried out a coup against the constitution and the congress of the party and we ordered their punishment.”

Biro blamed external Kurdish parties for the breakdown, adding, “They will not have their seats in the council [of the party], because we are aware there is a role by the PKK [Kurdistan Workers’ Party] and its intelligence in this incident,” he added.

“They know that and have confessed to it.”

However, Hasan Salih, the new party’s leader, said the split was caused instead by internal divisions.“Our friends [in Yekîtî], instead of accepting the need for changes and reforms, have ordered for the dismissal of four of our friends in Germany and Kurdistan Region, who were previously elected – despite internal procedures which do not allow for such an order,” he said.

In a video he posted on social media on Saturday, Salih claimed that the dispute was also caused by the KNC position on Afrin, which Turkey and Turkish-backed militias began occupying last year.He said, “Our Congress had decided to declare the state of Turkey as occupiers in Kurdistan, specifically in Afrin as a part of Kurdistan – but the media of the PYK-S does not say this – and that is a big disagreement.”

During the Turkish attack on Afrin in February 2018, a small faction in the Yekîtî party in the KNC temporarily withdrew from the KNC because it refused to leave the Turkish-backed Syrian National Coalition that backed the military operation.“Besides personal rivalries and power struggles, this could be one of the reasons for the split.”

The office of the newly-created Kurdistan Unity Party. (Photo: Kurdistan 24)

In his video statement, Salih also called for more Kurdish unity, urging, “The Kurdish circles must also unite, despite the fact that there are many parties. Their [political] stance must be united around the national rights of the Kurds.”

The dominant Syrian Kurdish factions, the PYD and KNC, have not successfully cooperated since agreements they reached in Duhok and Erbil between 2012 and 2014 failed to be implemented.

In the past, Yekîtî refused to recognize the PYD-backed local administrations in northeast Syria, accusing the PYD of “one-party rule,” a claim it rejects. It is possible that the new party could join, or at least support, the administration.

If so, a similar example would be the Kurdish National Alliance in Syria, established in 2016 and comprised of four parties which left the KNC, including the faction that split from Yekîtî in 1997. It now backs the local administration and joined local elections for the administration in December 2017.

However, the Kurdish Democratic Progressive Party in Syria, which left the KNC in July 2015, has so far remained an independent party.

It did not support the administration, nor did it return to the KNC, a fate that could be that of the newly-formed Kurdistan Unity Party.