HEWLÊR-Erbil, Iraq’s Kurdistan region,— Kurdistan Free Life Party (PJAK) fighters will not “sit idly by” if the U.S. goes to war with Iran, and could form a democratic front against the regime in Tehran, militia chief Zilan Vejin said in comments published Wednesday. 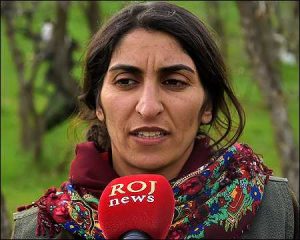 PJAK, the most active group in Iranian Kurdistan, is a militant Kurdish nationalist group based on the border areas between Iraq’s Kurdistan region and Iranian Kurdistan (Rojhelat), that has been carrying out attacks Iranian forces in the Kurdistan Province of Iran (Eastern Kurdistan) and other Kurdish-inhabited areas.

Since 2004 the PJAK (Partiya Jiyana Azad a Kurdistane) took up arms to establish a semi-autonomous Kurdish regional entities or Kurdish federal states in Iran, similar to the Kurdistan Regional Government (KRG) in Iraq. The PJAK has more than 3,000 armed militiamen, half the members of PJAK are women. It is affiliated with the Kurdistan Workers’ Party (PKK), a leftwing guerrilla movement which fights for great political and cultural rights for Kurds.

“We will not sit idly by if war breaks out between Iran and the US,” Vejin told Rojnews, an outlet close to PKK. “We also have our own agenda and policy.”

If a war does break out, “we as a political party can form a democratic front,” she added.

Vejin said any foreign intervention in Iran must consider the rights of its ethnic minorities, including the Kurds, who occupy Iran’s mountainous northwestern provinces.

“The agenda should take into account the characteristics of Iranian society and provide for the rights of all people from all the different national and ethnic backgrounds,” she said.

The PJAK co-chair said the US is squaring up to Iran in order to further its own interests – not to redress Iran’s human rights record or resolve the Kurdish question. “We think war and disagreements between them are not in the interests of the Iranian nations,” she said.

“Their problems are not over a solution to the question of the Kurdish nation, oppressed nations, human, women, or youth rights.”

“We think Iran and the US are fighting for their own interests.”