If you observed this picture the Kurdish of Khorasan region in the corner of most north eastern part is less than the Kurds of Urmia province of east Kurdistan, in Urmia province they are %61.6 of it’s total population but in the province of Iranian Khorasan they are %46.1, during the Persian safavid empire to quell the Kurdish rebellions in Kurdistan, they fought against each other because the Kurds were Sunni Muslims the Persians were Shia muslims that’s why the Kurds transferred from Kurdistan region to the Iranian Khorasani region, they were enforced to convert their doctrine from Sunni to Shia doctrine, in that time the Iranian Shia Azerbaijanis settled in Kurdish province, now the province divided between both ethnic groups of Sunni Kurds and Shia Azerbaijanis, as you see on the map the Kurds are presence in majority of the Iranian provinces, because in the last millennium the Kurdish empire of media was running the middle east and defeated other empires like Assyrian empire, their main place was Kurdistan and Mesopotamia 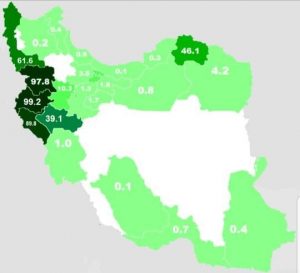