10 Sept 2016 – Kurdish PKK footage shows the guerrilla group infiltrate and nearly overrun a remote Turkish military outpost. The Turkish troops are caught off guard as the initial strikes come in, and they scramble for cover. After repeatedly viewing the footage, I believe that the Turks thought that the attack would be limited to indirect or rocket barrages originating from afar, so they take cover and just wait for the explosions to stop. 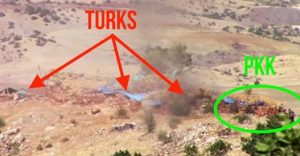 Unknown to them, a small assault squad of PKK fighters was nearby waiting for the initiation call. The maneuver unit moves directly up to the first bunker and then to the second throwing frag grenades into the windows.  At that point, the Turkish soldiers realize there is an enemy ground unit in the wire, and they begin throwing their own frags at the insurgents and exchanging small arms fire. Eventually, one of the bunkers is wildly ablaze, and the PKK assault squad decides that any further advance on the encampment isn’t worth the likely casualties they would take, so they exfiltrate under heavy suppressing fire being provided by a friendly unit from an elevated vantage point.  www.mesop.de