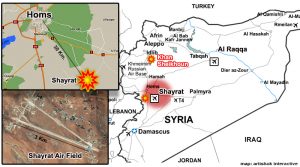 The US military launched 59 Tomahawk cruise missiles at a Syrian military airfield late on Thursday, April 6, in the first direct American assault on the government of President Bashar al-Assad since that country’s civil war began six years ago. The operation, which the Trump administration authorized in retaliation for a chemical attack killing scores of civilians this week, significantly expanded US military involvement in Syria.
The missiles were launched from two Navy destroyers — the USS Ross and USS Porter — in the eastern Mediterranean. They struck an airbase called Shayrat in Homs province, the site from which the planes that conducted the chemical attack in Idlib are believed to have originated. Syrian military aircraft, infrastructure and runways were hit

“Tonight, I call on all civilized nations to join us in seeking to end the slaughter and bloodshed in Syria and also to end terrorism of all kinds and all types,” president Donald Trump said to reporters from Mar-a-Lago, Florida, where he is hosting China President Xi Jinping and his wife…

“Assad choked out the lives of helpless men, women and children,” he said. He acted because of a “vital national security interest of the United States to prevent and deter the spread and use of deadly chemical weapons.”

debkafile: Washington has no doubt that the Syrian SU-22 bomber which Tuesday dropped a sarin gas bomb on Khan Sheikhoun in Idlib province, killing up to 100 people, was a joint Russian-Iranian-Syrian gambit to divert the Trump administration from a comprehensive plan for Syria. As US President and commander-in-chief he could not ignore this provocation.
Our sources report that the new US administration’s plans for Syria center on an offensive to evict the Islamic State from its Syrian capital, Raqqa, a mission for which US military preparations have been going forward for the past two weeks at five centers. To this operation Moscow, Tehran and Damascus were not averse. But that operation was also designed to rid Syria of Iranian and Hizballah forces – to which they were.

Secretary of State Rex Tillerson said that despite previous agreements, Syria had not surrendered its chemical weapons stockpile, and accused Russia of “failing in its responsibility to deliver on its commitment” to supervise the surrender of those chemical weapons. “Either Russia has been complicit or simply incompetent in its ability to deliver,” Tillerson continued.

The question now is whether Vladimir Putin will decide to hit back at the US operation. Russia did not retaliate for the Israel air strike on March 17 over the northern Syrian T4 air base. If Putin chooses to sit on his hands once again, the same question may be addressed to Iran and Hizballah.

Very possibly, Trump and Putin reached accord on the limits of the US punitive attack in Syrian in long hours of debate during the day between the US State and Defense Departments and the Russian Foreign and Defense Ministries, which were first reported by debkafile 24 hours ago. Pentagon sources report that Washington gave Moscow advance warning of the coming US attack on the Syrian Shayrat base where Russian air force units are also deployed.

Follow-up US military action may yet come after the US president asserted that for him, “many, many lines were crossed” by Assad’s chemical attack and his attitude towards Syria had changed..