2 Sept 2019 – ERBIL, Kurdistan Region — The Kurdistan Regional Government (KRG) is calling on locals from more than a dozen villages in the Duhok province to avoid their areas amid escalated Turkish airstrikes on alleged Kurdistan Workers’ Party (PKK) positions in the region.

The mayor of the Derker town east of Zakho said that people in the area have been told to stay away.

“Last Wednesday, Zakho security forces informed us to warn residents from 15 villages in Derker and Batifa sub districts of visiting and commuting in their villages,” Zeravan Musa told Rudaw.

Derker and Batifa are small towns located in the Sinat-Haftanin mountainous areas near the Turkish border. 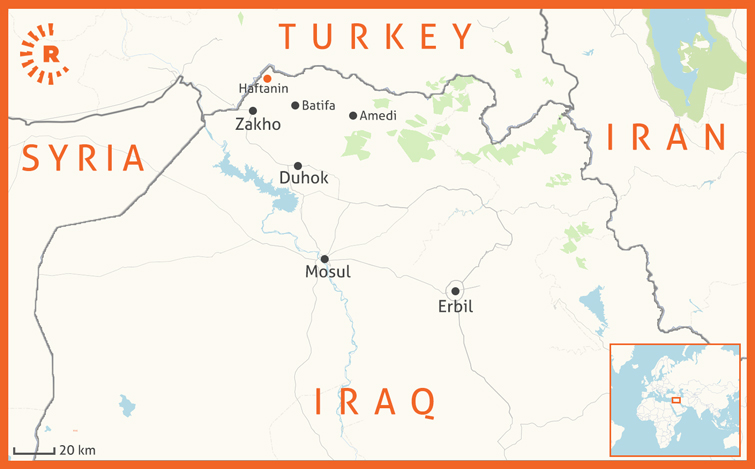 The third phase of Turkey’s Operation Claw against the PKK began on August 24 and is focusing on places where PKK fighters are apparently hiding in the Sinat-Haftanin region, according to the Turkish Defense Ministry.

The PKK fights for greater political and cultural rights for Turkey’s Kurds, and has fought the Turkish state since 1984, resulting in the deaths of over 40,000 people from both sides, including civilians. Ankara considers the PKK a terrorist organization. The PKK has long based itself in the Qandil mountains between KRG, Turkish and Iranian territory.

Musa said Turkish forces do not coordinate with local officials when conducting operations against the PKK.

“We do not know anything of the operation as no coordination has been done with us,” he said.

The orders to avoid the area will have adverse affects on the local economy, according to one resident.

“We make our living out of our farmlands,” Aziz Sali, from the Sheransh village, told Rudaw. “But now, security forces are warning us not to get close to our village.”

As part of the third phase of the ground operation, Turkey has entered two kilometers deep into the Kurdistan Region’s territory, an Iraqi border security official, speaking on the condition of anonymity due to restrictions speaking to media, told Rudaw. He also said Turkey does not coordinate its moves with Iraqi or Kurdish forces.

“As border patrol forces, Turkey has not coordinated with us about carrying out the operation,” the official said. “We understand they have entered two kilometers deep into [the Kurdistan Region] near Haftanin area.”

On Sunday morning, five suspected members of the PKK  were killed when a Turkish warplane attacked their vehicle in the Bari Gari district northeast of Duhok city near the Turkish border.

Fighting resumed between the PKK in Turkey after peace talks in 2015 failed following a two-and-a-half year peace process. Turkey regularly bombs apparent PKK targets in the Kurdistan Region. Hundreds of villages near the border have been abandoned as a result.

The first phase of Operation Claw began on May 27, followed by a second phase described as a “follow-up” operation on July 12. The first two phases were in the Khakurk region northeast of Erbil near the Turkish and Iranian borders.

Turkey has not announced the end of any of Operation Claw’s phases.