ANHA obtained a copy of the terms of the agreement which includes 3 main axes.

The second item is the security arrangements clause, as security is assigned to the Federal Police in cooperation with the Kurdistan region. Consequently, 2,500 members of the Internal Security Forces will be sent to city to end the presence of the rest of the security forces.

Note that since the liberation of Şingal, the Şingal Protection Units that participated in the liberation assumed the task of protection, which was formed from the sons and daughters of Şingal. However, in 2017, part of it was overrun by the Popular Mobilization Forces against the backdrop of the failed referendum conducted by the Kurdistan Democratic Party led by Masoud Barzani at the time, which caused the region to lose much of its territory, which was controlled by the federal forces and the Popular Mobilization Forces. 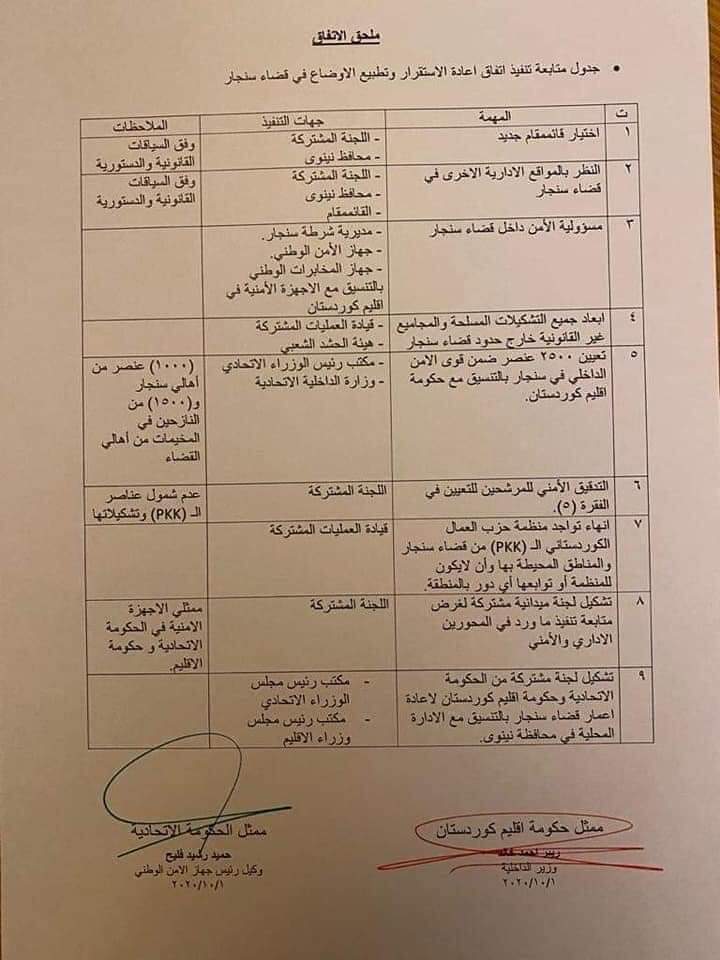 As for the third item, it includes services, and it is also done in cooperation between the two parties to reconstruct the city, which was damaged to an eighty percent level due to its occupation by ISIS.

As a reaction to this agreement, which did not take into account the opinion of the people of Şingal on the issue of managing and protecting their region, the people took place today, Sunday, in a mass demonstration to express their rejection of any decision related to the administrative situation in the region outside the will of its residents. And they issued a statement in which they set two basic conditions for acceptance of the agreement, namely:

– Involving the people of city in any decision regarding the administration that will be elected in the future from the people.

– Forming a committee to discuss and consult in everything related to city, with the effective participation of the people of the city.

It is noteworthy that, in 2014, Şingal, in northwestern Iraq, was subjected to a violent attack by ISIS mercenaries, during which they carried out mass murder and kidnappings in the region after all the Iraqi forces that describe themselves today as “legitimate” abandoned the people of Şingal and left them facing the brutality of ISIS.